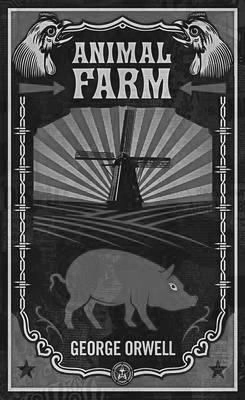 Animal Farm is George Orwell’s dystopian classic – a brilliant and timeless satire on the corrupting influence of power and the history of a revolution that went wrong. Orwell accounts for the bold struggle, initiated by the animals, that transforms Mr. Jones’s Manor Farm into Animal Farm. When the animals overthrow their master, they imagine it is the beginning of a new life of freedom. A wholly democratic society built on the credo that All Animals Are Created Equal. But are they? Or do they find themselves hopelessly ensnared once more?

“And remember, comrades, your resolution must never falter. No argument must lead you astray. Never listen when they tell you that Man and the animals have a common interest, that the prosperity of the one is the prosperity of the others. It is all lies. Man serves the interest of no creature except himself. And among us animals let there be perfect unity, perfect comradeship in the struggle. All men are enemies. All animals are comrades.”

George Orwell (whose real name was Eric Arthur Blair) was born in India in 1903. He served with the Imperial Police in Burma before turning his hand to novel writing and journalism. Orwell was the author of six novels as well as numerous essays and nonfiction works. Animal Farm was published in 1945, and it was this novel, together with 1984, which brought him worldwide fame. He died in 1950.