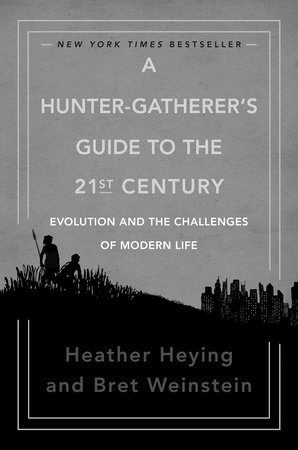 A Hunter-gatherer’s Guide To The 21st Century:

Evolution and the Challenges of Modern Life

A Hunter-Gatherer’s Guide to the 21st Century: Evolution and the Challenges of Modern Life by Heather Heying and Bret Weinstein. For some, they will be familiar from their popular weekly podcast; Darkhorse, where they discuss a range of topics through an evolutionary lens. I’ve been waiting for this book for almost two years. And the wait was absolutely worth it! This book holds an extraordinary evolutionary toolkit that will make us modern people more anti-fragile and well-equipped to face our modern challenges.

For evolutionary biologists Heather Heying and Bret Weinstein, the modern world is out of sync with our ancient brains and bodies. We evolved to live in small tribes, but today most people don’t even know their neighbors’ names. The cognitive dissonance spawned by trying to live in a society we’re not built for is killing us. In the book, Heying and Weinstein outline a science-based worldview on many varying issues, all of which will empower you to live a better, wiser life. They distill more than 20 years of research and first-hand accounts from the most biodiverse ecosystems on Earth into straightforward principles and guidance for confronting our culture of hyper-novelty.

“– Our individual consciousness likely evolved in parallel with collective consciousness, and would become fully realized only later in our evolution. Understanding what is in the mind of another, known as theory of mind, is staggeringly useful. We see the rudiments of this capacity in many other species, and we see it extensively elaborated in a highly cooperative few, such as elephants, dolphins, crows, and many nonhuman primates. We humans are by far the most aware of one another’s thoughts of any species that has ever existed, because we alone can, if we choose so, hand over the cognitive goods explicitly and with spectacular precision. We can accurately pass a complex abstraction from one mind to another by simply vibrating the air between us. It is everyday magic that usually passes without our notice. – “

In A Hunter-Gatherer’s Guide to the 21st Century, Heying and Weinstein provide an evolutionary framework for understanding what we are, where we’ve been, and how we might move towards a future that is maximally productive and free for all. In the beginning of the book, they review some evolutionary concepts, and introduce new concepts and framing for how to understand the human species. Then they proceed through an investigation of many of the major topics that modern people are concerned with: health, medicine, food, and sleep; sex, gender, parenthood and relationship; childhood, school, and adulthood; culture and consciousness, and how to build and live together in a functioning society.