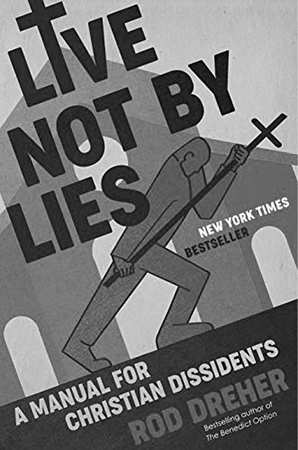 Live Not by Lies: A Manual for Christian Dissidents

For years, émigrés from the former Soviet bloc have been telling Rod Dreher they see telltale signs of soft totalitarianism cropping up in the West – something more Brave New World than Nineteen Eighty-Four. Identity politics are beginning to encroach on every aspect of life. Civil liberties are increasingly seen as a threat to safety. Progressives marginalize conservative, traditional Christians, and other dissenters. Technology and consumerism hasten the possibility of a corporate surveillance state. And the pandemic, having put millions out of work, leaves us especially vulnerable to demagogic manipulation.

In Live Not By Lies, Dreher amplifies the alarm and explains why it is so hard for us to recognize the threat of totalitarianism in our own time. He lays out steps for resistance and shares stories of modern-day dissidents who preserved their faith and their integrity during a time of tyranny.

“– Soft totalitarianism exploits decadent modern man’s preference for personal power over principles, including political liberties. The public will support, or at least not oppose, the coming soft totalitarianism, not because it fears the imposition of cruel punishments but because it will be more or less satisfied by hedonistic comforts. The contemporary social critic James Poulos calls this the Pink Police State:…powerful corporate and state actors will control populations by massaging them with digital velvet gloves, and by convincing them to surrender political liberties for security and convenience. – “

Aleksandr Solzhenitsyn famously said that one of the biggest mistakes people make is assuming totalitarianism can’t happen in their country. Too many of us are sleeping through the erosion of our freedoms, assuming that totalitarianism can’t happen in the liberal West. Live Not by Lies, which is inspired by Solzhenitsyn’s essay with the same name, is the wake-up call we need – and will equip us for the long resistance.